After a long hard day at the office, sometimes the only relief we can get is when we’re standing under a nice hot shower. But, what if you have a knot in your back and you want that water pressure spraying directly on it? You can do exactly that with the Moen Multi-Function Hand Shower Package with Hose.

In this review, we are going to talk a little more about the features of the Moen Multi-Function Hand Shower Package with Hose, but we are also going to give you an overview of what people who have purchased the handheld shower head had to say about their overall experience with it.

Moen a company that has made a name for themselves among homeowners because they make quality products. This handheld shower head by Moen is no exception. You’ll find that with this showerhead, it has a unique design that is the perfect accent for your bathroom, but it doesn’t lack performance, either.

It’s capable of delivering a flow rate of 2.5 gallons per minute, but you can also choose the different flow patterns too! If you are someone who enjoys a long hot shower with the water pouring over you, then you’ll be able to appreciate the power of this unit.

Notable features of the Moen Multi-Function Hand Shower Package with Hose include:

Click on the image to check out the product on Amazon.

The overall look of the shower head is perhaps the most notable feature. Moen is always producing quality fixtures that have a classy style and a rich color. Although the materials of this shower head are inexpensive, it is the finish that gives your bathroom the touch of luxury that you’ve been searching for, without spending a lot of money.

Since this shower head is made from a durable plastic material, it isn’t going to be too heavy in the hand. You’ll find that you’ll be able to hold it comfortably in your hand while bathing or cleaning, and your wrist isn’t going to become fatigued.

Not only that, but the handle of the shower head isn’t too wide or bulky, so you can be certain you’ll have a good grip on the shower head while using it, thus saving you from a big mess afterward.

You’ll notice that this shower head comes with a 60-inch flexible hose. This hose will allow you to take the shower head down from the wall and use it to reach those tender spots on your back, but the long hose will also help make bathing your children (or pets) easier, as well as cleaning the shower itself.

To install this handheld shower head, it is incredibly simple. You don’t need any special tools or skills to install the shower head and start enjoying it. The instructions in the owner’s manual are detailed and easy to read.

When we looked at the user reviews, we saw that most of the customers had great things to say about the Moen Multi-Function Hand Shower Package with Hose and left 4 or 5-star reviews. Of these reviews, people commented on how luxurious this shower head looks in their bathroom.

Owners said that the unit isn’t too heavy and it has a nice feel in the hand, which is nice especially when they were trying to bathe their pets in the shower. Though the shower head is made from plastic, they said it doesn’t feel cheap at all.

In regards to the spray patterns, people said that although it only offers five options, those five options are more than enough and you don’t get any side spraying and the water flows evenly.

So what did the remaining customers who left 3-star or below reviews have to say? The most common complaint customers had was that they felt that the hose was too short and they needed to purchase a longer hose for their needs.

Some people pointed out that their hoses felt cheap and flimsy, which caused the hose to kink up and restrict the water flow significantly. Some people said the hose wouldn’t sit flat against the wall because of the way it was packaged, now it has permanent kinks. A few people voiced their concerns about the mounting bracket that came with the shower head.

The bracket is made of plastic and they are concerned about how long it will last. Several folks pointed out that some of the flow settings are the same and there are only really 3 settings (in their opinion).

Customers were disappointed because they spend nearly $75 on a handheld shower head, thinking that it was going to be a quality product since it is from Moen, only to find out that most of the shower head is made from plastic.

Moen is synonymous with quality and you may be able to find a Moen product in any home across the country.

The beautiful bronze finish is going to add sophistication and elegance to your shower stall, while the five different spray patterns will prove to be that therapeutic touch you may have never thought you needed in your life.

If you’ve come to this page, you’re looking for the best water softener resins for 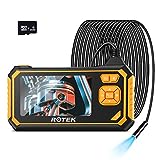 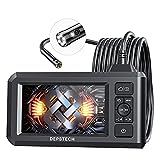 PlumbingLove.com is a participant in the Amazon Services LLC Associates Program, an affiliate advertising program designed to provide a means for sites to earn advertising fees by advertising and linking to Amazon.com